OnTrack Reading Comprehensive Word Lists - eBook: $6.95 by Rodney Everson
144 pages with over 100 word lists organized around vowel sounds or consonant spellings. Just $6.95 for the e-book or $19.95 for the spiral-bound book. Check the Preview at lulu.com.

The two lists of three-syllable words at the top are used in the OnTrack Reading Multisyllable Method. The first list contains 55 words on four pages separated into chunks according to the method's Main Rule and Three Exceptions. The second list contains 90 words on two pages presented as normally appearing words (called the read/chunk/spell list.)

Again, all of the 3-syllable words are chunked according to the application of the Main Rule and the Three Exceptions. As was the case before, direct your child to try the First Vowel Sounds on the first attempt at reading the word unless he already knows the word and reads it accurately. 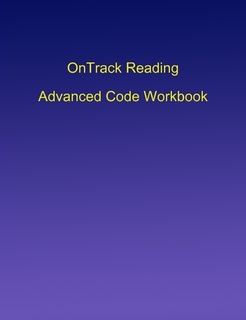 Remember, you should have completed all of the 2-Syllable Chunk-by-Chunk word list before starting this one, but you can still be working on the remaining 2-Syllable Read/Chunk/Spell word list.

When your child moves to the three-syllable level, don’t be surprised if he regresses in strategy and starts guessing again, as well as putting extra sounds into the word or leaving some sounds out. Just as two syllables were more challenging than one, so three is more challenging than two and a lot of the old habits resurface along with the stress produced by the increased challenge.

Incidentally, the three-syllable words are not as hard in some respects as the two-syllable words were because they are more familiar words to younger children. This was intentional, and is designed to give your child a growing sense of competence as he moves to longer words.

As with the two-syllable word lists, the words are presented in order of increasing difficulty. As you move through the lists, your child will encounter more and more words where he has to try a second, or even a third, option before he recognizes the word.

Pay particular attention to the chunked words te-le-phone and e-le-phant. Breaking off the /l/ sound from the /e/ sound preceding it is a bit tricky for many children, but after a few attempts your child will be able to do it.

Time to Learn the Spellings of the /sh/ Sound

The OnTrack Reading Phonics Program does not follow the practice advocated in some curricula of teaching the various endings such as tion and cious as units. It’s inconsistent to spend so much time training a child to concentrate on the spellings of each sound in a word or chunk and then suddenly switch to having him memorize units consisting of several sounds.

Instead, the various spellings of the /sh/ sound are taught. Those spellings are sh in ship and dish, ch in chef, ti in nation, ci in special, si in mansion and ssi in mission.

In the OnTrack Reading Advanced Code Phonics Workbook, you will find a mapping sheet for the /sh/ sound as well as a sheet for practicing finding the various digraphs of the /sh/ sound. As indicated in the workbook instructions, your child should be reasonably comfortable with two-syllable words before mapping the /sh/ sound because by its nature most of the examples are more than one syllable.

In fact, if you take the time to examine the two-syllable word lists again, you’ll see that no complex /sh/ spellings are used in the Chunk-by-Chunk list at all, and that they don’t show up on the Read/Chunk/Spell list until the last column. This, too, is by design.

Proceeding Through the Worksheets

Teach your student the phonics advanced code in as little as 8 weeks with our flagship 170-page workbook and instruction manual.